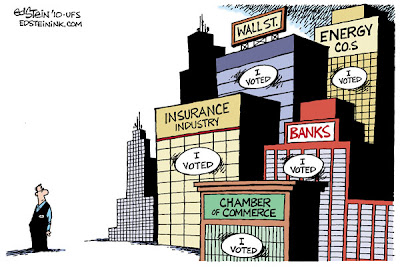 With apologies to Moderate Republicans, if you actually exist

A friend forwarded this to me ... and refused to accept credit for it; instead, he claims the Internets wrote it. I post it here with apologies to the four remaining moderate Republicans in America.

And that "eat" is the only word that, if you take the 1st letter and move it to the last, spells its past tense — ate.

And if you rearrange the letters in "Tea Party Republicans", and add just a few more letters, it spells: "Shut-up, you free-loading, progress-blocking, benefit-grabbing, homophobic, resource-sucking, racist, hypocritical jerks, and face the fact that you nearly capsized the country under Bush."
at 4:49 PM No comments:

This argument that Bush & Co. deserve some gratitude, and beside, Democrats are just as culpable, is disingenuous at best, and stark revisionism at worst.

We should recall that the mood of this country at the time of the Iraq invasion was damned ugly and the Bush Administration fanned those flames with vigor. At the time, in rural Texas, at least, it was was considered unpatriotic to be a Democrat who believed in religous freedom and thought the concept of "pre-emptive invasion" was dangerous. Anyone who expressed anything that smacked of being "anti-war" was considered a traitor. I am not exaggerating. I ran a weekly newspaper in my small town and it was a very scary time.

But, in case you've forgotten your history, the Bush Administration ginned up evidence ("slam dunk!"), lied to the American people then used (and destroyed) the credibility of a fine American (Colin Powell) in their rush to war. While the events of 9/11 may have terified them and while they may have believed their own lies, they browbeat the rest of us into an unprovoked invasion of another country. And, the most we've gotten by way an apology is the political equivalent of "oops."

You're right, ﻿neither Party has all the answers. Neither are saints. But, in broad terms, this current crop of Republicans (dating back to about 1994) are some of the most hateful, racist, spiteful and spoiled politicians I have seen in my 35 + years of watching government.

I grew up in a Republican household. My father was a life-long Republican, a classic conservative (as opposed to the neo-cons). Because of my upbringing, I still hold many classically conservative beliefs, beliefs that today's Republican Party hasn't subscribed to since Bob Dole stepped down from the Senate to run against Bill Clinton. Those Republicans would have told GWB to get a grip when he and Cheney and Wolfowitz started beating the drums of war. They would have stood against the divisive, thinly veiled racism and anti-government vitriol of the Tea Party. There are no Republican leaders today with the courage to stand up to these cranks. Not even one. Not even John McCain (who I used to admire and respect).

And now, GWB apologists want us to give him credit for bringing this shameful episode to a close? They want Dems to acept the blame for believeing GWB's lies and manipulated intelligence? WTF?!

Not no, but hell no!

No one particularly likes taxes and all of us want our government — at all levels — to be efficient. However, we all expect our government to deliver certain services (police and fire protection, good roads, clean water, etc.) and to deliver those services well, and on demand.

This simply cannot be done with out financial support (taxes). Each year, it costs more to provide those services than it did the previous year. Yet, very few of us actually want our government to cut any of these services. This is why your city or county or school board will need more money this year, just to stay even with last year, never mind accommodating growth.

But, the public hearing on the new county tax rate I attended last week was an eye-opener. The commissioners proposed that our tax rate drop by a penny on property values that had dropped by 8-10 percent over the last year. In simple terms, that means that the vast majority of the people in that crowded court room last week would see a much lower county tax bill. But, to hear them talk, one would have thought that the county was asking for a huge increase.

At the same time this was going on, there was grumbling in the room about services. Roads. Bea's Kitchen. Roads again. Even more roads. So, these people want government, and the services government provides, but they don't want to pay taxes. How can that work?

What these people have forgotten — along with just about everyone else who hammer local government officials about taxes — is that the State of Texas has balanced its budget for the better part of two decades by forcing counties and cities and school districts to fund more and more of what used to be the State’s obligations. It isn't that the State is spending less money, far from it. It's that fewer and fewer of our tax dollars are making it back to Milam County.

You’ve heard of “unfunded mandates,” right? That's a big part of what's at play in the tax rates set by your county commissioners or your city council or your school board.

What's more, it's obvious by the vitriol on display last week that our state's leaders have done a masterful job deflecting the blame for local tax rates. This is not to say that our local guys are all saints, or that every tax dollar they collect is spent wisely, but they're taking the fall for the true culprits: Gov. Perry, Lt. Gov. Dewhurst, Sen. Steve Ogden and the Republican leadership in Austin. If you're upset about local taxes, direct your ire there.﻿

*There Ain't No Such Thing As A Free Lunch — coined by Robert Heinlein, a noted writer of science fiction and Libertarian

Just in case you were wondering ....

• 64% of Tea Party activists think that America's best years are behind us.
• 66% think global warming does not exist or will not have a serious impact.
• 57% think George W. Bush was a good President.
• 40% think Sarah Palin would also be a good President.
• 32% think that violent action against the government could be justified.
• 42% want to decrease legal immigration.
• 41% believe that gay couples should have no form of legal recognition.
• 45% believe that abortion laws should be stricter than they already are. • 59% like Glenn Beck.
at 7:17 PM No comments: 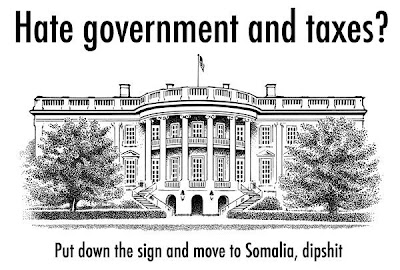 Back in the day, I considered myself a hairy, wild-eyed, bomb-throwing anarchist. I was never all that but it was cool to think so.

Today, my hair isn't as thick, though I still wear it unfashionably long, and I tend to appreciate a certain amount of order in my life.

I'm mostly interested in (you might even say obsessed with) state and national politics, the First Amendment, the state of print journalism, free expression issues and other things that could fall under the heading of "social justice."

Audio Panton,
Cogito Singularis.
Listen to everything,
think for yourself.

I wrote under this byline during nearly a decade and a half as an editor and publisher of small, usually weekly newspapers in rural Texas.

The column won a few moderately covetous press awards along the way. As a way of preserving some of them (and a few news stories I wrote), I've posted a few in the archives for this site. Anything older than 2007 or tagged "The Ragged Edge" is from that era.

The name of the column came from a cartoon of a frazzled man sitting at a desk piled high with papers, coffee mugs and overflowing ashtrays, staring off into space. It's obvious any coherency of thinking is beyond him. The caption was "standing at the ragged edge of thought ..." and it seemed to include a self-deprecating studiousness. Whatever.

It also comes from the fairly standard newspaper practice of setting the copy on the opinion page justified left ... or, ragged right (thus the url of this effort).

We didn't get to stay long but I was allowed into the debate hall when Barak Obama and Hillary Clinton held their debate in Austin, TX in February. Since I took the picture, I suppose you can tell how close I was to the action ... for about five minutes. You can see more of my photos and such on my picasaweb album.

Story Archive: So, if you're really bored ...